The destructive talent hidden in plastic

Plastic Garbage Info From the Cradle to the Grave, 'Plastic is hell'

The angel possessed an ability to make all kinds of things it thinks cheap.

I was not on earth since the beginning. Humans wanted cheap and light materials for their convenience. After much research, Belgian-born American named Beckland invented synthetic resin in 1906 and that's where I started.

I was blessed from the moment I was born. I was wanted by every men and women, young and old, capitalism and socialism, Westerners and Asian people. By this time, I was almost recognized as an angel of God.

Human beings are divided into Before Plastic (BP) and After Plastic (AP), based on when I was born. You say there were Neolithic, Paleolithic, Bronze, and Iron Age? You may not want to admit it, but now it's the plastic age.

During the BP era, mankind had to make long lasting products with heavy metals, and made transparent objects with fragile glass. Clothes made with expensive materials were expected to be worn for a long time.

After AP, I started to change the life of mankind in earnest from the 1950s.

Plastic containers contain polyethylene PE, polypropylene PP fiber, polyethylene terephthalate PET for bottled water, and polystyrene PS for styrofoam. I am in every subject matter that starts with poly-.

Look at things you use in everyday life: cosmetics, smart phones, cars, clothes, packaging vinyls, fabric softeners, tobacco, food additives, and so on. I will be in places and objects that you have never thought I would be in.

Often I am perceived as a thermoplastic material that is vulnerable and breakable in heat, but in fact, I am strong in heat. Typical examples where I am used as a thermosetting material are in spacecrafts and satellites. Syringes, a medical equipment, and other hygienic medical supplies are also in that list. If you think about it, you are with me from the moment you are born to the moment you die.

What do you think? Without me, it would be like going back to Iron Age, right? 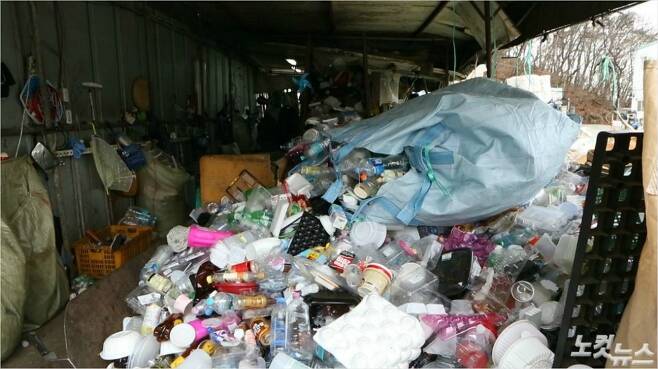 From angel to devil, from plastic to fine plastic

Even if it gets smaller, the characteristics I have are still there. I am light and well broken, but it does not disappear. It does not easily sink into the water. It is virtually impossible to separate me from the smaller ones.

It has been confirmed that I was in the bottled water you drank yesterday, the cosmetics you use now, and the air you will breathe tomorrow. I am as deep into your life as easy as you used me.

Though not visible, a downsized me can affect creatures. I can sting cell walls or accumulate in living organisms and cause side effects. There are many bad substances as well as chemical substances mixed with environmental hormones from birth. It can be a carrier to carry other viruses. Where will the devil's talent go?

In fact, in the 1960s, when the plastic industry was in full swing, there was already a paper on fine plastic. But at that time, the industry was booming. Of course, the research has not received much attention. Maybe, it was simply human selfishness.

In the 2000s, more and more scholars have been studying environmental hormones such as bisphenol and portal acid in my body and the fine plastic issue has been challenged.

From the 2010s onwards, interest in plastic waste and small plastic issues, such as mammals, birds, and fish, has increased.

There have been more discussions recently. Especially the underwater problem is serious. When I become garbage, I am poured into the sea and accumulate. I perpetually get smaller in the process.

I am often mistaken for food that is smaller in the sea. Sometimes plankton, and sometimes fish eat me. Then the upper predator eats them again. When I get into the food chain, I go up to your table. If you are lucky, I will go to your children.

I'm already in your body. I have been detected in your urine and stool for a long time. There are also studies that I can be harmful in a lab environment.

Researchers who are majoring in human plastic toxicology in the field of microplastics point out that it is not a matter of 'being' or 'not being' an influence to humans. It may or may not affect some people. For example, exposure to certain pollutants can lead to toxicity of micro-plastics as well as differences between people who have cancer and those who do not.

The toxicity may be different when exposed to a composite material that will be toxic with a single fine plastic material. I also warn you that the toxicity can go up. Even if microplastic is emitted from the body, it may cause problems in that process.

Should I tell you even more amazing stories?

With today's technology, it's hard to measure me down to 20 micrometers. It is not yet enough to analyze human science and technology. The danger I pose when broken down into nano units is a reality that can not even be predicted. When the technology develops to that extent, Pandora's box is opened.

Seen in any way, it is apparent that I am not good, but where will the devil's talent go? It's not clear yet, but experts agree that micro-plastics influence people in logical terms. 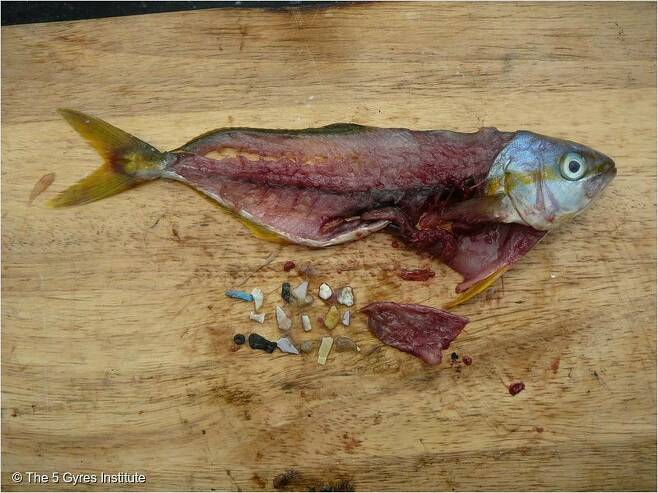 Pieces of fine plastic from a fish's stomach (Greenpeace, The 5 Gyres Institute)

The meaning in a 8000 won oyster rice bowl

Koreans eat a lot of seafood, right? The oysters prices are cheap. It is a precious food in Europe, but don't you eat oyster rice in Korea? Have you ever thought about how it is possible? The south coast is a very good condition for oyster farming. Just dipping Styrofoam in the south coast will create oysters. Isn't that amazing?

But you know what? Styrofoam is also plastic. Because of the styrofoam buoys used in farms such as oysters, mussels, and seaweed, the fine plastic levels of the Korean waters are very high. Look closely at the seaweed pushed into the sea. The white styrofoam granules will be full. You would not have felt it but I can be seen anywhere on white sand. Associated research has already been published.

Are there only Styrofoam granules? No. After littered by you, I am in every corner of a beach. I have been discolored by sunshine and broken by wind and water, everyone agrees; I'm the one you threw away. Since glass is sharp, people feel the alert, but I'm just passed by. I just give an impression of 'simply dirty.' Isn't that true?

That's how I am polluting the sea. Is that all? I am in mountains, fields, rivers... you name it. I am in the Arctic Glacier. Don't you think that I am also in the Antarctic glacier?

So you say you did a good job in separating garbage collection? You may think so, but many of them are not recycled. There are some that are not meant to be recycled since birth, and there are some that you made difficult to recycle. Then, you have to incinerate or bury them in a landfill. Whether it is incineration or going to a landfill, toxic gas with deadly chemicals are emitted. You know the fact that it does not rot well, don't you? At least a hundred years must elapse for it to start rotting a bit.

Europe and the developed world exported me to China or Southeast Asia. It is a sign that they want me to be processed in another country than processing me in their own country. Do you remember the fact that China was no longer going to accept the waste vinyl, and that there was a problem with the separation of garbage? There is a case that I, exported to China, was forcefully returned to Europe. In developed countries, people say that I am a lot of garbage in Asian countries, but I am pretty sure they know that they also have some responsibility. 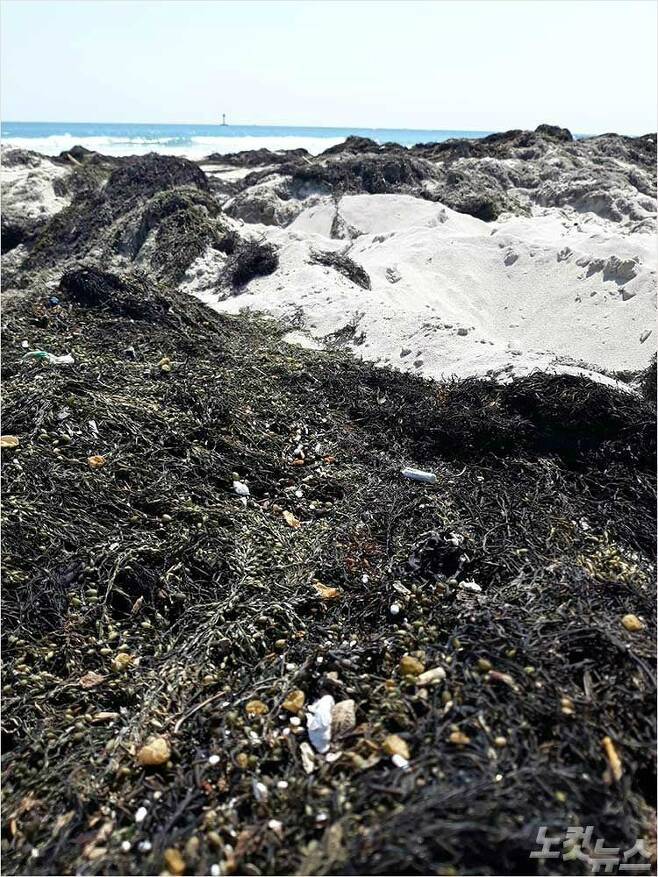 White styrofoam granules are on the seaweed pushed by the Gyeongbok Guryongpo beach in Pohang, Gyeongbuk. (Park Geum-mook reporter-Nocut News))

Is your choice free? Or is it necessary?

Isn't it creepy now that you have heard me talk about this topic? I admit that I can become a demon. I want to be an angel like before. If you make me a little less, though uncomfortable but use me less, use me but trash me well, and process the trashed me well, I won't be a demon like I am now. However, you don't.

Everyone thinks there is a reason because even if you do not act now, there is no harm to you right away.

Even if you continue to make plastic products in your enterprise, even if you use plastic, and even if the ocean is filled with plastic waste, you will not be harmed immediately. Look at the news. There are reports that whales or birds have died from microplastics, but none that people have died.

Some people are skeptical. However, 'if other people use plastics, would changing my habits alone make a difference in the world? Is there a better way economically?' You will fall into sage time right away. Maybe that's why the microplastic problem is not so much different from the one that actively commented on the fine dust problem.

At some point, the most important thing is for a company that makes me to fix their thoughts. Think that the faucet is open and the water is dripping into your home. The first thing to do is lock the faucet, right? You do that because water will flood your house anyways even though you scoop water out of the house.

Sometimes I say I'm green. But I'm not completely harmless to the environment. I just break down a bit better than regular plastics. They say they use microbes or insects to get rid of me. But you can not release microorganisms or insects to the world. What about the side effects? That's not a fundamental solution.

Maybe problems can appear when you get older. Maybe there will be a problem with your child's generation. So, today, You are going to use plastic and you will throw it away tomorrow. This cycle will continue as long as it does not affect your life right now.

Wrapped up, light, easy, thought of as an angel, I will turn into a devil that make your life expensive, heavy, uncomfortable.

I keep on growing. My shrinking figure will continue to rise. The next generation will have to worry more painful than you do. As long as you do not reduce plastic usage, it is my demon's talent to lead humanity to hell unless you act together.

So, do not criticize but change your life. Let me be an angel, please.

Plastics are occupying humans' 'daily life' and 'lifetime'. With plastic, the earth is bruised and the environment is squeezing. Recently, 'microplastics' have become a risk factor for human health. In addition, Korea is a plastic pollution bureau that even CNN had paid attention to. Nevertheless, we are ignorant and prejudiced about plastic. CBS Nocut News has published a new report on the 2019 New Plastic Fact Check format to address this plastics threat.

※ This project was supported by the Korean journalism society - SNU fact check center. This article is a story reconstructed by the collected materials and expert opinion through '2019 New Plastic Report'.

All Up to Us